We supported strong leaders that contributed to significant change

Over the past year we worked closely with the National Political Assembly of Indigenous Women (ANPMI). As part of the activities for the 2020 National Day for the Elimination of Racial Discrimination, we brought together representatives from ANPMI and the Women's Human Rights Education Institute for an online forum titled "Indigenous Women and CEDAW." The event featured the participation of experts Alda Facio and Gladys Acosta, who worked together with the participating Indigenous women to launch a project focused on the creation of a General Recommendation on the rights of Indigenous women for the States parties of the Committee on the Elimination of Discrimination against Women, which will be finalized in 2022.

In partnership with ANPMI, we advocated for and successfully achieved the declaration of National Indigenous Women's Day. Additionally, ANPMI members successfully nominated one of their members to lead Mexico's National Council for the Prevention of Discrimination, which has allowed the organization to expand its partnerships and promote its agenda. 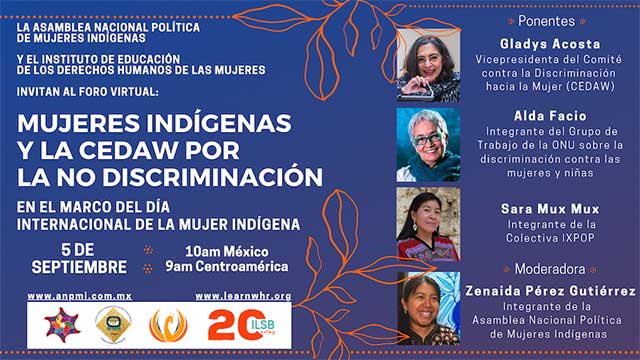